The instruction that deals with drawing sprites on screen is the DRW Vx, Vy, n or Dxyn in hex. It breaks down as follows:

Each sprite is made made of 8 bits of which only the upper half (the high nibble) is used. To draw the sprite, the I register is set to the start location of the sprite data to be drawn on screen. Any two registers Vx and Vy are chosen to hold the screen co-ordinates that the sprite should be drawn to. The n is the number of bytes that comprise the sprite data. For eg, in main.cpp I use some Chip 8 instructions to draw the word “READY” on boot up. The letter R is made up this way:

Simple enough. Decoding such an instruction is a bit more involved though. Quoting from Cowgod’s description of it:

The interpreter reads n bytes from memory, starting at the address stored in I. These bytes are then displayed as sprites on screen at coordinates (Vx, Vy). Sprites are XORed onto the existing screen. If this causes any pixels to be erased, VF is set to 1, otherwise it is set to 0. If the sprite is positioned so part of it is outside the coordinates of the display, it wraps around to the opposite side of the screen

Whew! It seems to be a bit tricky at first but it’s pretty clear what needs to be done. A bit of code will help illustrate the steps:

There are two loops involved here. One which steps through the number of bytes to draw (n), and the other that steps across the individual bits per byte of data.

The first thing to do is reset the Flag register, since I need it to signal if any pixel is erased.

The Y co-ordinate is increased by 1 as we step through the sprite data too, and wrapping around can be achieved by simply using the MOD operator against the screen height (32). So, (Vy + i) % 32 will automatically wrap to (0+i) if (Vy + i) >= 32. A similar technique is used to wrap for the X co-ordinate as I’ll explain shortly.

The next loop will step through the 8 bits in the current byte and put them across the X co-ordinate.

The bits for the sprite data are read from left to right as they are put down across the screen column. The way I do it is to mask the MSB (Most Significant Bit) of the high byte like so:

Note that shifting the value when it’s actually 0 is redundant but shifting is a fast operation and is faster than checking for 0 and not doing the shift (because branching is expensive)! The final outcome of the above looks like this:

To set the byte (which represents a pixel) at the display offset, I simply check if the bit mask is a 1 (set), which is the only operation that will affect a pixel on screen (in the case of 0, the previous pixel at the location is not affected). If writing to the screen, and there is a previously set pixel at that location I need to set the Flag register accordingly (this can be used by games as a means to detect collision), which is done by the following:

Finally, I can move on to the next bit in sequence by shifting the sprite byte left by 1 so that the next bit becomes the MSB and the old MSB is dropped off - we don’t need it anymore since we are done with it anyway: 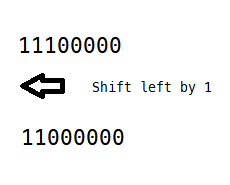 And that’s the sprite drawing routine done and dusted. Well not quite. I actually didn’t write to the graphics hardware but to a software display memory. I need to upload/blit the information to an OpenGL texture which will then be mapped to a quad and then drawn on the screen.

To do this, I created a CTexture class, which has the update and render methods to achieve the above. I won’t go into those details as they are specific to OpenGL but the code is in CTexture.cpp, if you’re interested.

That concludes most of the core emulation and the point of this series of articles. I also added sound and input handling to the emulation because things wouldn’t be as much fun without them. However, they aren’t as interesting to implement or talk about. Again, if you’re interested in the technical aspects of those, the files Chip8Sound.cpp and main.cpp will be of interest.

There is one more aspect of Chip8 that may of interest though, and that is writing a simple program using the Chip8 instructions. I go over this in the last part of this series, in part 5.