The Chip 8 is a actually an interpreted language running on a virtual machine. Cowgod’s page describes both in great detail. I will not go into the details as already described there, I will instead focus on how I went about writing an emulator based on the specifications. The critical bits of info can be distilled as follows:

That’s it really. Compared to a machine like the NES or the ZX Spectrum, the Chip 8 is actually a far simpler machine to emulate given the above specs.

At its core an emulator steps through memory, decoding instructions (if they are valid) and taking an action based on what the instruction is supposed to do. The instructions may require the CPU to do arithmetic operations, act on certain conditions, copy blocks of data, output to the screen, play sound, handle input et al. The display, sound and handling of inputs require interfacing with external hardware components, so it makes sense to separate them from each other, like so: 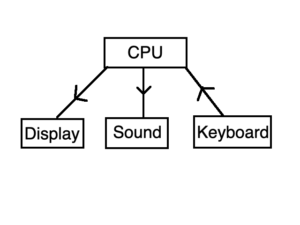 In general, the display, sound and keyboard are all I/O devices and will be abstracted in a better way when writing a more advanced emulator. But for the purpose of Chip 8 I wanted to keep things simple and not go overboard with creating classes out of every single thing.

I imagined the emulation steps as follows:

However, since I decided to add some “features” to the emulator, the above steps will work in conjunction with the GUI and debugger as well.

The good thing about Chip 8 is that I don’t have to worry about instruction timings (all of them take 1 cycle) or any sort of syncing between the raster and CPU or memory as can happen in more advanced systems. Effectively the display can be decoupled from the emulation.

Right. Now that I knew what I had to do (even if at a high level), I could go about actually implementing all the stuff I outlined above. And that’s in Part 3.